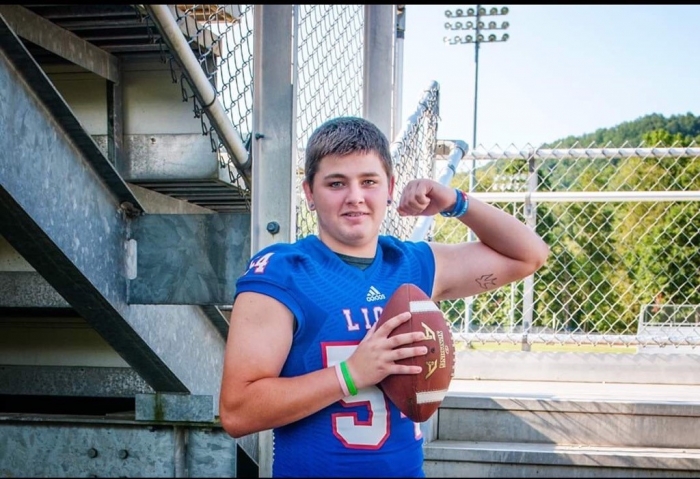 Biography: Wesley Izahya Fogle, age 14, of Garrison, Kentucky, passed away Tuesday evening, December 17, 2019, from injuries sustained in an automobile accident. He was born June 9, 2005, in Marion, Ohio, a son of Nikoli Fogle (Brittany) of Bucyrus, Ohio, and the late Jerrica Lynn Adkins.
Wesley lived in Bucyrus until 2012 and moved to Garrison with his mother. He was a student and football player, playing on the varsity as a freshman, for Lewis County High School. He loved sports and was an avid Bengals fan. Wesley enjoyed listening to music and spending time with his family and friends, especially with his little sister, Aria.

In addition to his father, he is survived by four sisters, Aria Hensley of Garrison, Kentucky, Bailey Douglas, Shilese Fogle and Lillyan Fogle, all of Bucyrus, Ohio. great grandparents Roger and Jude Haycook; grandparents Erin (Michael Lacy) Fogle, Rebecca and Gary Edington; and Carla and Scott Murdoch; aunts and uncles, Gerri Swinehart Benjamin (Kim Morrow) Fogle, Chad (Lacey) Laipply, Jason (Dawn) Orewiler, Justice (Michelle) Fogle, Branden (Christina) Douglas, Bryan (Betsy) Douglas, Jason (Shauna) Stout, Bob and Paula Musgrove, Mike Wilson, and Carl and Tabatha Dye.  He was preceded in death by grandfather Joseph Fogle and great grandparenst Janet Laipply, Roger and Gloria Laipply, Ralph and Peggy Miller, William and Lynne Murdoch, and Woody and Gail Dye. He also leaves many other family members and friends who will sadly miss him.
Friends may call at the Munz-Pirnstill Funeral Home, Bucyrus on Thursday from 4:00 pm until 7:00 pm at which time services will be held with Bishop Ted Thomas officiating.  The family suggest memorials be made through the funeral home and expressions of sympathy can be left at www.munzpirnstill.com
To order memorial trees or send flowers to the family in memory of Wesley Izahya Fogle, please visit our flower store.