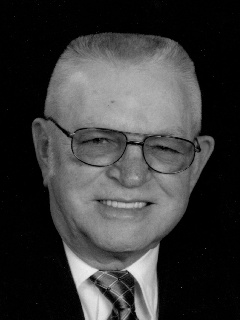 Vernon was born on January 5, 1935 in Wyandot County to John and Hazel (Hefflefinger) Brewer.  He met and married Geraldine E. Clugston on June 8, 1957.  They had one beautiful daughter, Pamela Jean  Brewer (VanBuren) who preceded him in death on April 9, 2001.

A lifelong resident of the Bucyrus area, Vernon worked at the Timken Company and retired on December 31, 1993 after 40 years of employment.  Several years ago he had worked at the Zeigler Mill in Bucyrus.  He was a graduate of Lykens High School in 1952.

Being very dedicated members of the Crawford County Kennel Club, Vernon and Geraldine have raised and shown Keeshond and Dachshund dogs since 1962.  They loved traveling to various dog shows and produced 35 champions.

Vernon was a skilled machinist, craftsman, and carpenter.   After retirement, Vernon enjoyed woodworking and landscaping, along with taking care of their family dogs.  He worked part time at the Humane Society in Bucyrus for several years until 2015.  He was an enthusiastic fan of sports, especially Ohio State Buckeyes, and the Cleveland Indians and Cavaliers.

Vernon thoroughly loved family gatherings, and holidays were always filled with laughter and fellowship.  He was often a man of few words, but Vernon had a quick wit and friendly disposition that naturally drew people to love him.  He touched many people, both young and old, and he will be missed.

Vernon was a member of the Bucyrus United Methodist Church.

Friends may call on Tuesday, April 18, from 5-8, at Munz-Pirnstill Funeral Home in Bucyrus.  The funeral will be held Wednesday, April 19 at 11am at Munz-Pirnstill with burial immediately following at Oakwood cemetery. The family suggests memorials be in the form of contributions to the Crawford Co. Humane Society of the Bucyrus United Methodist Church.  Expressions of sympathy can be left at munzpirnstill.com
To order memorial trees or send flowers to the family in memory of Vernon E. Brewer, please visit our flower store.