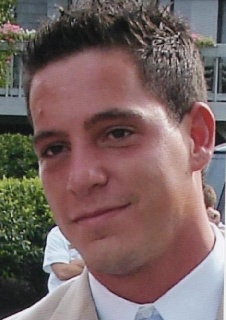 Biography:  Seth William Pugh, age 33, of Toledo, Ohio, passed away December 2nd, 2016 at St. Vincent Hospital in Toledo. Seth was born December 13, 1982 in Galion, Ohio, to Rick and Kelly Pugh who survive in Anna, OH. He was preceded in death by Grandfather William Harris, and Grandparents Hoppy and Maxine Pugh.

In addition to his parents,  Seth is survived by his Beloved Christina, and sons Myles, age 3, and Donovan, age 1, brother Noah Pugh, sister Kyrstan Martin, Grandmother Brenda Harris, and many loving aunts, uncles and cousins.

Seth was a 2001 graduate of Anna High School and received a BA of applied Science in 2012 from Owen State college, Toledo, Ohio. He proudly served his country in the Army National Guard as a Sergeant with the Company A 612th Engineering Battalion. He was deployed to Iraq in 2005-2006. Seth enjoyed golfing and flying with his Dad, and loved spending time with his family. Seth will be sadly missed.

Funeral services will be held at 2pm on Friday, January 13th, 2017 at Munz-Pirnstill Funeral Home, 215 N. Walnut St, Bucyrus, Ohio, with Pastor Peter Doseck officiating. Family and friends may call from 12:20pm Friday until the time of Service.  Burial will be at Oakwood Cemetery in Bucyrus, Ohio with Military Honors provided by American Legion Post 181. Memorial contributions may be made to Wounded Warrior Project in Seth’s Memory through the funeral home.
To order memorial trees or send flowers to the family in memory of Seth William Pugh, please visit our flower store.