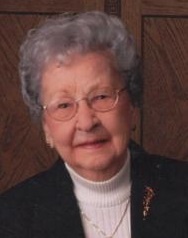 Biography:  Ruth Luetta (Mohrhoff) Darr, a resident of Carlisle Place, was born at home in Chatfield Twp. on January 19, 1914 to the late David Frederick and Luetta (Sutter) Mohrhoff.  She was married on September 8, 1935 to Weldon Charles Darr who preceded her in death on December 17, 1993.  She was also preceded in death by daughter Jana Lee Eicher; great granddaughter Rachael Mitsch; brothers and their spouses, Oliver (Marquerite) Mohrhoff and Myron (Naomi) Mohrhoff; as well as sisters and their husbands Berniece (John) Brokaw and Genevieve (Donald Leonhart) (Ed) Mayer and brother in law Myron Darr.

Ruth is survived by daughter Kay (Regieg) Kimerline; five grandchildren, Jill (Brian) Mitsch, Michele (Thomas) Richards, David Eicher, Ruth (John) Sharp, and Lisa (Anthony) Brooks; She was blessed with 12 great grandchildren, eleven which survive, Christopher and Benjamin Mitsch, Lindsey, Kristen, and Nathan Richards, Sophia Eicher, Megan and Madison Sharp, and Lydia, Mallory, and Nolan Brooks; son in law William Eicher; and sister in law Arlene Darr as well as many nieces and nephews.
Ruth was a graduate of New Washington High School in 1932 and later in life went to Mansfield Beauty School.  She was an active member at St. John’s Lutheran Church in New Washington as a Sunday School Teacher, sang in the choir and a member of the Ladies Society.  She transferred to Good Hope Lutheran Church when she moved to Bucyrus in 2002.  Ruth and her husband owned and operated the Darr Barber and Beauty Shop in New Washington for many years.
Ruth was a warm and loving person who truly enjoyed being with her family and friends.  Her thoughtful and kind ways were an inspiration to those who knew her.  She will be greatly missed but has left us with wonderful memories.
Funeral Services will be held on Thursday at 11:00 am in the Good Hope Lutheran Church with Gene Luidhardt, S.A.M. officiating, burial will be in St. John’s Lutheran Cemetery, New Washington.  The family will receive friends at the church from 10:00 am until the time of the service.  Memorials may be made to the Good Hope Steeple Fund, The Emmacular Degeneration Foundation, or the donor’s choice through the Munz-Pirnstill Funeral Home. Expressions of sympathy can be left at munzpirnstill.com
To order memorial trees or send flowers to the family in memory of Ruth Luetta (Mohrhoff) Darr, please visit our flower store.