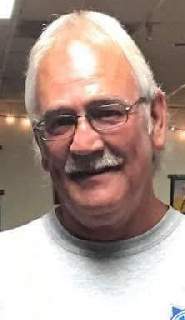 Biography:  Robert R. "Bob" Rowland, 60 of Bucyrus passed away on Friday at home, his death was unexpected.  Bob was born April 23, 1957 in Bucyrus to the late Ellsworth I. "Hap" and Dorothy (Volkmer) Rowland.  In addition to his parents he was preceded in death by his longtime special friend Judith "Berny" Morris on July 12, 2015 and nephew Kenneth Hildreth.
Bob is survived by brothers Terry L. and Randy W. Rowland; sister Sharon Hildreth; nieces and nephews Shawn (Veronica) Hildreth, Tim Hildreth, Trenton (Stephanie) Rowland, Carrie (Ricky) Charles, Travis (Annette) Rowland, and Tara Rowland; as well as aunts, uncles, and cousins.
Bob last worked as a bartender at VFW Post 1078.  He had a love for racehorses and for many years helped at the fairgrounds.  Bob also enjoyed NASCAR, the Cleveland Browns and Indians, camping, and collecting die cast cars.  He was a member of the VFW Post 1078, AMVETS Post 27, and Bucyrus Moose Lodge #669.  Bob graduated from Bucyrus High School in 1975 and lived his entire life in Bucyrus.
A Memorial Service will be held on Wednesday at 6:00 pm in the Munz-Pirnstill Funeral Home with Rev. Bernie France officiating.  The family will receive friends from 4:00 pm until the time of service.  Memorials may be made through the funeral home and expressions of sympathy can be left at www.munzpirnstill.com.
To order memorial trees or send flowers to the family in memory of Robert R. "Bob" Rowland,, please visit our flower store.