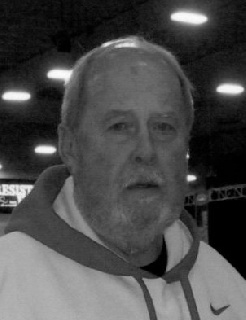 Biography:  Robert F. Foreman, 74 of Bucyrus passed away on Monday October 30, 2017 at Marion General Hospital, his death was unexpected.  Bob was born June 30, 1943 in Bucyrus.  He was the son of the late Arnold E. and Margaret (Beattie) Foreman.  In addition to his parents, he was preceded in death by nephews Thad and Quinn.
Bob is survived by wife Barbara (Pauley) Foreman who he married May 23, 1964; son Sean Foreman of Stillwater MN; granddaughters Megan, a freshman at Miami Univ. and Sidney of Stillwater; brother Dan Foreman of Bucyrus; sister Sandy (Dave) Pfahler of Galion; and aunt Ginny Shelt of Bucyrus.
Bob graduated from North Robinson High School in 1961 and attended Ohio State Univ.  He retired from PPG as a supervisor in 1996 after 33 years.  Bob was a member of St. Paul Lutheran Church in North Robinson. He was an avid golfer and longtime member of the Bucyrus Golf Course.  Bob also was a member of the Ohio State Rebounder Club and season ticket holder for Ohio State Women’s Basketball.  He kept score for over 30 years for both the Bucyrus girls basketball and softball teams.  A huge movie buff, Bob loved to travel and was also a member of the Bucyrus Moose, American Legion, and Elks Lodge.
Funeral Services will held on Sunday at 3:00 pm in the Munz-Pirnstill Funeral Home with Rev. Jerrod Schaaf officiating, burial will be held on Monday at Oakwood Cemetery.  The family will receive friends at the funeral home on Sunday from 1:00 pm until the time of the service.  Memorials may be made to St. Paul Lutheran Church, North Robinson and expressions of sympathy can be left at www.munzpirnstill.com
To order memorial trees or send flowers to the family in memory of Robert F. Foreman, please visit our flower store.