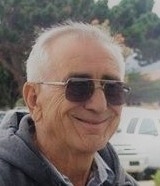 Biography: Richard N (Dick) Yuhas of Orchard Park, Bucyrus, a loving husband went to be with his lord on Saturday December 21,2019 surrounded by his family and his devoted dog at his feet. Dick is survived by his loving wife of 66 years and his three daughters that will miss him dearly. Dick was born July 25,1931 to the late Albert and Nellie Yuhas. He is survived by his daughters Stephanie Mahle (Tim Atkinson) Melanie (Rod) Rowlinson, both of Bucyrus and Lorie Yuhas (Jeff Scott) of Washington Court House.
Anyone who knew Dick was familiar with his smile, his teasing sense of humor, and his amazing wood craftsmanship as the owner of Richard Yuhas Builders, Over the years Dick has constructed three homes for his family. One of which was in California in the 1960s because of the building boom, the last one was on Catawba Island where he worked for the Catawba Construction Company. Learning the fine details of the woodworking trade by the side of his father then advancing on to work for Bud Clugston of Clugston Builders among other construction work. His love for family, traveling, gardening, hit and miss engines, and building with his hands always resulted in his generous hand-crafted gifts of bread boxes, rolling pins, canes and wooden bowls. He was a member of Bucyrus Church of Nazarene, Crawford Antique Farm Machinery Assn.
Dick will be deeply missed by his wife Pat, his daughter Stephanie Mahle (Tim Atkinson), Melanie (Rod) Rowlinson, both of Bucyrus and Lorie Yuhas (Jeff Scott) of Washington Court House. 7 grandchildren Curt (Jayme) Massie of Winston Salem NC, Ryan (Lauren) Massie of New Albany, Blaine Rowlinson (Lesley Skaggs) Michelle (Josh) Muchow of Ostrander, Shawn Rowlinson (Sara Gebhardt) of Bucyrus, Erick (Ashley) Biederman of Miamisburg Oh, Shannan (Brandon) Jones of Dayton Ohio. 7 great grandkids Ella, Sam Massie, Peyton Finley Rowlinson, Makenna, Paisley Muchow, Greyson Biederman. Sisters Joann Spoon, Peggy Sherman, Nancy Johnson. Brothers in law Merrill, Mike Reynolds. Sister in law Amanda Gillspie. Along with numerous nieces and nephews
Proceeded in death by his parents, his mother in law Genevieve smith and stepfather in law Ivan Smith, Father in law Merrill Reynolds, Step mother in law Janet Reynolds brothers Phillip Yuhas, Robert Yuhas. Brothers in law Paul Spoon, Darryl Sherman, Ray Johnson.
Funeral services will be Thursday, Dec. 26 at 1:00 pm in the Munz-Pirnstill Funeral Home with Rev. Ray LaSalle officiating, burial will follow in Brokensword Cemetery.  The family will receive friends at the funeral home from 11:00 am until the time of the service. Memorial contributions may be made to the Orchard Park Activity Fund and expressions of sympathy can be left at www.munzpirnstill.com

The family of Richard Yuhas would like to extend there sincere gratitude to orchard park, heartland hospice.
To order memorial trees or send flowers to the family in memory of Richard N (Dick) Yuhas, please visit our flower store.