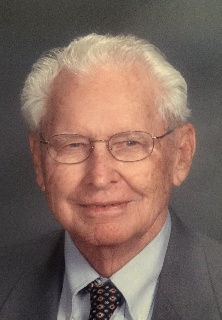 Biography:  Richard C. Sand, 94 of Bucyrus passed away on Monday, February 15, 2016 at Bucyrus Community Hospital, following a 27 year battle with cancer.  Richard was born on April 14, 1921 in Crawford Co. to the late Milton and Garnet (Smith) Sand.  He was married on June 2, 1946 to Winifred “Winnie” (Beattie) Sand who survives.  In addition to his parents, he was preceded in death by his son Dr. Neil R. Sand in 2003; brothers Wilbur, John, Earl, and Glen Sand and sisters Karen Bruce and Marguerite Feichtner.

In addition to his wife, Winnie, Richard is survived by his daughter Paula (Steve) Iler, Bucyrus; grandchildren Mark (Michelle) Sand and Audra (Joseph) Bidwell both of FL; Nathan Iler of Colorado; great grandchildren Eliza, Fitzgerald, and Lochlan; brother Robert Sand, Bucyrus; and sisters Margery Rogers, Bucyrus and Marilyn (Don) Tippin of MI.
Richard retired from Crawford Construction after working there for 34 years where he was a part owner.  He lived his entire life in the community and was a Holmes Liberty Graduate in 1940.  Richard was a member of the St. Paul’s Lutheran Church and served in the U.S. Army during WWII.  He received 5 bronze stars while serving in the military, having been stationed in the jungles of the Philippines, and New Guinea.   He was a longtime member of the American Legion Post 181 and VFW Post #1078.  Richard enjoyed traveling, bowling, and cooking; and spent much of his time conducting business and connecting with his family on his computer, skills he learned in his 80's and 90's.
Funeral Services will be held on Friday, February 19th, at 1:00 pm in the Munz-Pirnstill Funeral Home with Rev. Michael R. Greenler officiating, burial will follow in Nevada Cemetery.  The family will receive friends at the funeral home on Friday from 11:00 am until the time of service.  Memorials may be made to the St. Paul's Lutheran Church or Gifts for Yanks and expressions of sympathy can be left at munzpirnstill.com
To order memorial trees or send flowers to the family in memory of Richard C. Sand, please visit our flower store.