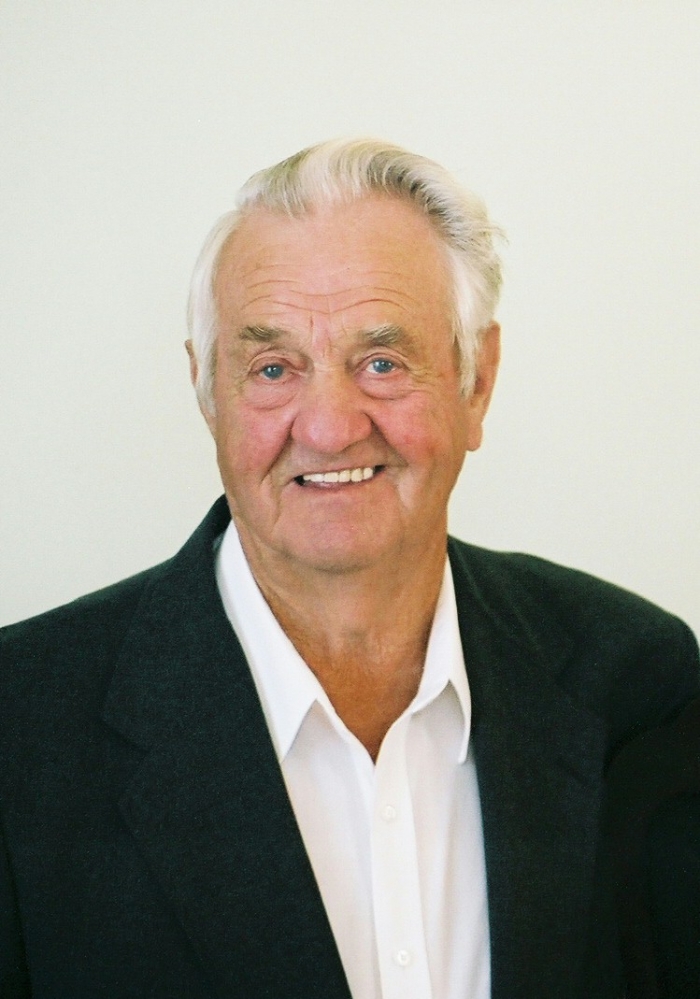 Biography: Perry D. Rothhaar “Donald” of Bloomville passed away on Tuesday July 21, 2020 at home with his family Donald was born November 29, 1925 in Brokensword, Crawford County, Ohio, son of Perry S. and Gladys Candel Rothhaar. He graduated from Chatfield High School in 1943 after which he served in the Army in Europe until his discharge on August 8, 1946 as a Staff Sgt. At that time, he returned to Chatfield to farm, and on Oct. 4, 1946 married Lula Loretta Luidhardt his high school sweetheart and classmate who preceded him in death on September 26, 2007.
They had four children who survive: Kenneth (Susan) of Bloomville, Rita (Mark) Mead of Wetumpka AL, Donna (James) Betts of Chatfield, and Dorothy (Charles) Baird of New Washington. Also surviving are 8 grandchildren: Aaron (Michelle) and Matt Rothhaar, Amanda (Scott)Keith, Mason (Brea) and Marshall (Paige) Mead, Jamie (Carrie) and Jake (Amy) Betts, and Dusty (Glory) Baird. Also 21 great-grandchildren: Megan, Wyatt, Ellayna, Eastin, and Kyna Rothhaar, Hayden and Derek Keith, Mary Catherine, Benjamin, Andrew, Ivie, Brooklyn and Campbell Mead, Bailey, Aubrey, Stella, Faye, and Charlotte Betts and Jeandhel, Hutch, and Charlote Josol.
Also surviving are two brothers Kevin and Dwight , sister-in law Connie Luidhardt all of Bucyrus area,  sister-in-law Pat of Lawton MI and Brother-in-law Virgil Gottfried of Wilksboro NC.
He was preceeded in death by: brother Kenneth (died in infancy), brother Wayne and his wife Miriam Rothhaar of Sylvania, brother Lyle (Pat) Rothhaar of Lawton MI, brother Roger and his wife Jane Rothhaar of Blakesburg IA, sister “Pat” (Virgil) Gottfried of Wilksboro NC sister in law Zelma (Kevin) Rothhaar, sister in law Johanna (Dwight) Rothhaar,  As well as In-laws Calvin and Mary, and Paul Luidhardt of Bucyrus area.
Perry was a member of the Evangelical Pietist Church where he served on council. He also served on the Chatfield School Board and was first President of the Buckeye Central School Board. He was an avid high school athlete, racoon hunter, fisherman, collector and story teller. While farming and shearing sheep for others he also worked at the Swan Rubber Co. for 25 ½ yrs.
Outdoor Funeral Services will be held at Donald's residence, 3878 Carey Road, Bloomville, OH on Monday at 11:00 am with Pastor Larry Bertsch officiating and burial to follow in Lust Cemetery.  The family will receive friends at the house from 10:00 am until the time of the service.
Memorials may be made to the Evangelical Pietist Church of Chatfield or Avita Home Health & Hospice of Galion. Expressions of sympathy can be left at www.munzpirnstill.com
To order memorial trees or send flowers to the family in memory of Perry D. Rothhaar “Donald”, please visit our flower store.