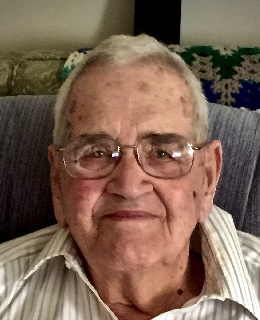 Biography: Paul Russell Iler, age 95, of Bucyrus, passed away peacefully on December 4, 2018.   Paul was born October 22, 1923, in Lima, OH to the late Rance and Bessie (Barthauer) Iler.  He was also preceded in death by one son, Rickie, and infant sister, Margaret.

Paul graduated in 1941 from South High School in Lima, Ohio.  He immediately enlisted in the U.S. Navy, and served during WWII as an aviation radio technician.  He was sent to Pearl Harbor soon after the bombing aboard a 2-man navy reconnoissance plane, scouting for enemy aircraft. Paul arrived just as fellow sailors were being rescued by cutting holes in ships as smoke still filled the air from the attacks. Many of his friends did not survive the war; he never forgot his fellow naval service men and the sacrifices they made.

Paul returned to Lima in 1945 following his military service. He noticed a beautiful young lady swinging on the front porch across the street.  He asked his mother who she was and she replied "Well, that's Eleanor, our neighbor."  Paul decided to "visit her."  Paul and Eleanor were married February 16, 1946 and had a wonderful life together lasting over 72 years.​

Paul was a member of St. Paul's Lutheran Church in Bucyrus.  He enjoyed family time and togetherness.  Paul was the area supervisor for Ohio Power Company and retired in 1986.  After retirement he and Eleanor enjoyed traveling to the west coast to visit with family and for many years they spent the winter months in southern Texas.  Paul was an avid stamp and coin collector and he spent many hours organizing his collection. He enjoyed the football and baseball teams of Cincinnati, Atlanta, and Cleveland as well as the OSU Buckeyes.​

The family will receive friends on Tues, December 11, at 1:00-2:00 at the Munz-Pirstill Funeral Home in Bucyrus.  Funeral Services will follow at 2:00 pm with Rev. Mike Greenler officiating, burial will take place  in the Oakwood Cemetery.  Military honors will be provided by the American Legion Post 181.  Memorials may be donated to St. Paul's Lutheran Church in Bucyrus and expressions of sympathy can be left at www.munzpirnstill.com
To order memorial trees or send flowers to the family in memory of Paul Russell Iler, please visit our flower store.