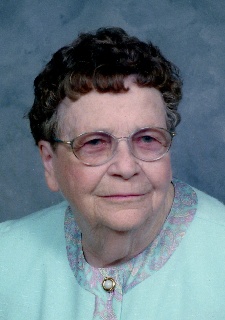 Biography: Mary Grace Christman, 94 of Bucyrus passed away on Tuesday February 26, 2019 at Maplecrest Assisted Living.  Mrs. Christman was born October 31, 1924 in Monroe County, OH to the late Henry W. and Belle (Winland) Smith.  She was married July 3, 1943 and enjoyed 59 wonderful years with Delmer L. Christman who preceded her in death on April 13, 2002.  She was also preceded in death by grandson Douglas Keiter, infant sister  Wilhamina; and two brothers Lavern and Clarence Smith.

Mrs. Christman moved to Bucyrus in 1948 and was a graduate of Lewisville High School.  She was a member of St. John's United Church of Christ.  Mrs. Christman was a homemaker and helped her husband with farm duties.  In addition, she worked outside the home at numerous jobs which included North Electric, Cloverfarm, Carmar Gardens, and Ten Eycks.  Mrs. Christman was an avid baker and made thousands of cookies, candies, and pies over the years.  She was a 4-H advisor for many years and enjoyed watching her girls show their steers at the county fair. Most of all her family was her pride and joy.

Funeral Services will be held on Friday at 1:00 pm in the Munz-Pirnstill Funeral Home with Rev. Joe Platt officiating, burial will follow in Oakwood Cemetery.  The family will receive friends on Friday from 11:00 am until the time of the service.  In lieu of flowers memorials may be made to the American Cancer Society, Home Care Matters, or the Council on Aging.  Expressions of sympathy can be left at www.munzpirnstill.com
To order memorial trees or send flowers to the family in memory of Mary Grace Christman, please visit our flower store.