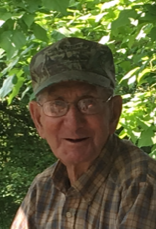 Biography: Lee Johnson, age 89, went to be with the Lord February 13, 2020 from Altercare of Bucyrus. Lee was born to Claude and Lucinda "Litteral" Johnson in West Liberty Kentucky, March 22, 1930. Lee married LouAnn "Gallant" Johnson December 12, 1981. Lee is preceded in death by parents; brothers, Hershell Johnson; sisters, Fredia Johnson, Maggie E. Johnson, and Helen Johnson; grandchildren, Eddie Young and Addison Lawrence; daughter-in-law, Kristina Johnson.
Lee is survived by wife LouAnn Johnson; children, Janice (Robert) Young, Danny (Juanita) Johnson, Randy (Beth) Johnson, Pete Johnson, Shelly Park, Justen (Denielle) Johnson, and Crystal (Wesley) Shuster; brothers, Garland (Terry) Johnson and Henry (Wanda) Johnson; as well as several grandchildren, great-grandchildren, great-great grandchildren, great-great-great grandchildren, and numerous nieces and nephews.
Lee was very proud of being a grandpa and loved spending time with his family. He was a member of the American Legion in Sycamore Ohio. He was a member of the United Aerospace Machinist aka UAM. He retired from Komatsu after 19 years of being a machinist. Lee also worked at Peebody's did construction, with Swan and Cobey. Lee also served as Deputy Sherriff in Missoula, Montana.  He was a member of the Pentecostal Tabernacle but most recently had been attending the Freewill Baptist of Bucyrus. In Lee's younger years he enjoyed hunting coons, rabbits, and deer. He was also a veteran and was active duty in the Army National Guard.
Visiting hours are Monday February 17, at Munz-Pirnstill Funeral Home from 11AM-3PM. The funeral will follow visiting hours at 3PM. Lyle Arnett and Carl Angel will be officiating services. Memorials may be made to Freewill Baptist or Tabernacle of Praise. Moments of remembrance may be left online at www.munzpirnstill.com
To order memorial trees or send flowers to the family in memory of Lee Johnson, please visit our flower store.