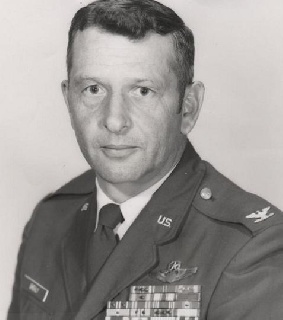 Biography:  Kenneth “Sam” Alton Shealy, age 87, died on September 17, 2016. He lived his life with grace and discipline. God, country, and family were there every moment to light his way and guide his path. He had been in failing health for the past year. He was born to the late Alton E. Shealy and the late Lois F. (Ulmer) Shealy. He was also preced in death by his sibling, Joyce A Schott, Glen D. Shealy, and Ramon L. Shealy.

Shealy was a 1947 graduate of Sulphur Springs School. He worked on the family farm before being accepted as Air Force Aviation Cadet. He joined the Air Force in 1949, graduated flight school earning his wings, and received his commission as Second Lieutenant in October, 1950

Shealy’s career took him all over the world. His first tour abroad began with a two week ocean voyage from San Francisco to Tokyo, Japan, and then to South Korea where he was assigned to the 25th Fighter Squadron. He flew 100 combat missions over North Korea and was credited with a MIG kill on December 28, 1951. One of his fighter combat planes was named ‘Bucyrus Baby’, in honor of his home-town area. In 2007 Shealy was invited by the government of South Korea to return there and receive thanks and recognition for helping South Korea attain their freedom.

Shealy also enjoyed a lifelong love of the land and he could read the seasons like no other. Before retiring from the Air Force he frequently spent summer vacations in Ohio, on the family farm, plowing fields and planting. After military retirement Shealy farmed and raised cattle. He received the Award for Merit from Crawford SCWD for outstanding accomplishments in Resource Conservation in farming.
Shealy managed Port Bucyrus-Crawford County Airport from 1978 to 1980. He had an instructor rating and taught many to appreciate the freedom and passion of flight. Later he flew as a corporate pilot for O.H. Materials of Findlay from 1981 to 1992.

He was a lifetime member of St. Paul Lutheran Church of Sulphur Springs, Ohio, where he served 13 years on the church council as Elder and Trustee. Kenneth Shealy was a member of Bucyrus Masonic Lodge 139, F and AM. 32nd Degree Mason in the Valley of Columbus and member of Aladdin Shrine, Columbus, Ohio. He served the lodge as Senior Deacon, Junior, and Senior Warden. He was also a member of Bucyrus Shriners; the Order of Daedalians (Fraternal Order of Military Pilots); and a life member of the American Legion 181. Colonel Shealy is featured on Eric Grohe’s famous ‘Liberty Remembers’ mural in Bucyrus, Ohio. He was a 2007 inductee into the Crawford County Veterans Hall of Fame.


The Shealy family will receive friends from visitation and viewing on Wednesday September 21, from 5-7 pm, and a Masonic service at 6:45 pm at the Munz-Pirnstill Funeral Home. Funeral services will be held at St. Paul Lutheran Church, Sulphur Springs, Ohio, September 22, 2016 at 11 am, with Pastor Hans Scherner officiating. Burial with military rites will follow in St. Paul Lutheran Church Cemetery.

Memorial contributions may be made to Maplecrest Assisted Living, Home Care Matters Hospice, or St. Paul Lutheran Church through the funeral home. Expressions of sympathy, photos, and memories can be made at www.munzpirnstill.com
To order memorial trees or send flowers to the family in memory of Kenneth "Sam" Alton Shealy, please visit our flower store.