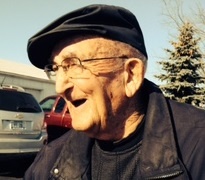 Biography: Kenneth C. Fegley, a Bucyrus resident for 96 years, passed away early Friday morning at Carlisle Place.  Kenny was born on September 12, 1920 to Laura (Keckstein) and Gale H. Fegley,. He was the fourth of six siblings.  He is survived by his sister Eleanor Miller of Bucyrus.  He attended Holy Trinity School through 8th grade and went on to Bucyrus High School where he was twice recognized as an American Legion Award Scholar and as an outstanding athlete in three sports. He was class president in both his junior and senior years.


After graduation, he began working at Swan Rubber Company until he enlisted in the army during WW II.   He saw Belgium, France, and Germany among other European countries and was still moved when relating what he saw while liberating the concentration camps. He was proud of his service to his country and until  last year, attended every Memorial Day Service at Oakwood Cemetery since his return from the war.


He and his sister Ellie were delighted to have flown to Washington DC on Honor Flight.  They were featured in a People magazine article and named grand marshals of the Bucyrus Memorial Day Parade in 2015.


When he returned to Bucyrus in 1945, he married the love of his life, his wife of 65 years, Betty (McPeak) Fegley.  Her death in July of 2012, he has said, was the most difficult event of his life.  Kenny and Betty had two daughters, Jo Elaine, who also died in July 2012, and Jeanne Jacobs of Columbus, Ohio.  He was grandfather to Suzy Jacobs of Chicago and Jenny (Clint) Edgington of Grandview Heights.  He was great-grandfather, “GG “, to Cole, Grant, and Connor Edgington.
Kenny always loved sports and competed in local baseball leagues and later enjoyed playing golf. He counted his hole-in-one as one of the highlights of his life.  He often recalled seeing Babe Ruth play at League Park in Cleveland.  He was looking forward to the start of baseball  season this year.
Kenny took pride and pleasure in working in his yard and was seen mowing and trimming until just two years ago, when he turned this duty over to his nephew Jerry Fegley and later to great-nephew, Michael Miller.


His wry wit was his most memorable characteristic and it served him well in difficult times.  He joked with the nurses, aides and family who were with him in his last hours. He never complained; he faced adversity with unflappable grace and just kept moving forward. He was calm and kind and could find humor in any situation.
Kenny was a good man.

The family will receive friends beginning at 1:00 pm on Tuesday at Munz-Pirnstill Funeral Home. A short service will take place at 2:00 pm, followed by burial at Oakwood Cemetery. Memorial contributions can be made to Wounded Warriors Foundation.
To order memorial trees or send flowers to the family in memory of Kenneth Fegley, please visit our flower store.