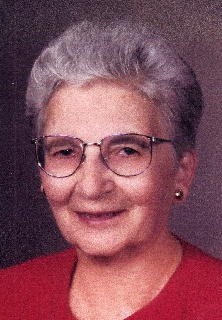 Biography: Josephine Mary Bush, 95, of rural Bucyrus, died on Wednesday April 17, 2019 at Maplecrest Assisted Living in Bucyrus.  She was born March 15, 1924 in Palermo, Sicily to the late John and Mary (Melilli) Invocato.


Josephine graduated from Holmes Liberty High School in 1943.  Following graduation, she was employed at W.A. Riddle Corp. in Bucyrus where she met her future husband.  Josephine was married on October 19, 1946 to her husband of 67 years Donald J. Bush who preceded her in death on May 21, 2014.


Josephine was a member of Holy Trinity Catholic Church where a Mass of Christian Burial will be Celebrated on Wednesday at 11:00 am with Father Paul Fahrbach as Celebrant, burial will follow in Oakwood Cemetery.  The family will receive friends at the Munz-Pirnstill Funeral Home on Tuesday from 4:00 pm until 7:00 pm with the Rosary being recited at 6:45 pm.  In lieu of flowers, memorials may be made to Homecare Matters Home Health Hospice or Maplecrest Assisted Living.  Expressions of sympathy can be left at www.munzpirnstill.com
To order memorial trees or send flowers to the family in memory of Josephine Mary Bush, please visit our flower store.