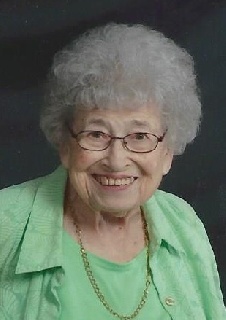 Biography:  Janet L. Shuck, 91 formerly of Sulphur Springs and most recently of Bucyrus passed away on Tuesday February 14, 2017 at Altercare of Bucyrus.  Janet was born November 2, 1925 in Bucyrus to the late Ernest and Alice (Flickinger) Reinhard.  She was married April 21, 1946 to Robert Shuck who preceded her in death on Feb. 13, 1994.  She was also preceded in death by son Kenneth, granddaughters Michelle Retterer and Staci Shuck, brothers Jim, Ed, and Allan Reinhard, and sisters Evelyn Neff, Irene Wolff, Margaret Carle, Barbara Jean Rice, and Carol Rittenour.
Janet is survived by children Michael (Marla) Shuck, Bucyrus; Karen (Ken) Scott, Tiro; James (Debbie) Shuck of Kathleen, GA; grandchildren Shari and Matt Shuck, Lisa (Denis) Hoover, Todd Scott, Brad (Kim) Scott, Heather (Greg) Hone, Josh (Andrea) Shuck, and Amanda (Peter) Fanson; 19 great grandchildren; 4 great great grandchildren; sister Kathryn (Charles) Britton; sister in law Jean Reinhard; brother in law Rod Rice; and sister in law Helen Rike.
Janet was a graduate of Sulphur Springs High School in 1943. She was a member of St. Paul Lutheran Church, Ridgeton Rd., the Women of the Church, and the Rebekkah Circle.  Janet was the Director of the American Cancer Society in Bucyrus for 22 years and prior to that had worked at the Farm Bureau and Montgomery Wards.  She was an avid sports fan, especially of her family.
Janet was involved in many local organizations that included Home Care Matters, Thrivent, BPW, Red Hats, TOPS, Guiding Mothers Club, Cancer Support Group, Relay for Life, the Board of the Humane Society, Volunteer at the Hospital, and at one time was a Girl Scout Leader.  Janet was the Volunteer of the Year in 2010 honored by the Chamber of Commerce.
Funeral Services will be held on Monday at 11:00 am in St. Paul Lutheran Church on Ridgeton Rd. with Rev. Kathy Shuck Kluding officiating, burial will be in Union Cemetery.  The family will receive friends at the Munz-Pirnstill Funeral Home on Sunday from 2:00 pm until 5:00 pm.  The family suggests memorials be made to the Cancer Society, Church, Home Care Matters, Humane Society or their choice.  Expressions of sympathy can be left at munzpirnstill.com
To order memorial trees or send flowers to the family in memory of Janet L. Shuck, please visit our flower store.