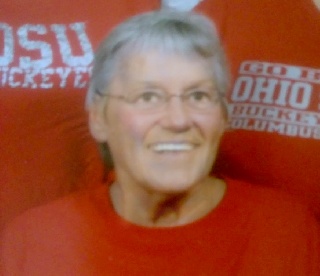 Biography:  Janet L. Laipply, 74 of Bucyrus passed away on Thursday at Altercare of Bucyrus surrounded by her family.  Janet was born January 13, 1945 in Bucyrus to the late Richard E. and Winifred (Trimble) Hayes.  In addition to her parents, she was preceded in death by sister Joyce Walker and aunt Lura Griffis.
Janet is survived by daughter Erin Fogle; son Chad (Lacey) Laipply; Bernadette Fox, who was like a daughter; former husband Roger Laipply; grandchildren Benjamin (Kim Morrow) Fogle, Ivy Laipply, Nikoli (Brittany) Fogle, and Cheyenne Elkins; great grandchildren Wesley Fogle, Bailey Douglas Fogle, Shilese Fogle, Lillyan Fogle, Kaestyn Fogle, Trey Laipply, and Coy Baird; sister Geraldine "Gerri" Swinehart; nephews Ryan (Carrie) Swinehart and Eric Walker; and great nephews Izac, Cooper, and Madelyn.
Janet worked as a caregiver in Home Health Care and several years ago worked at Crawford Lanes.  She was a Bucyrus High School graduate in 1963 and a member of the St. John's United Church of Christ.  Janet was formerly a member of the Ladies of the Moose and enjoyed the O.S.U. Buckeyes and spending time with her grandchildren and great grandchildren.
A Funeral Service will be held on Tuesday at 7:00 pm in the Munz-Pirnstill Funeral Home with Bishop Ted Thomas officiating,  The family will receive friends from 4:00 pm until the time of the service.  Additionally a Celebration of Life Gathering will be held on April 27 at 2:00 pm at a place to be determined.  The family would like the guests to wear OSU gear on Tuesday for the service.  Expressions of sympathy can be left at www.munzpirnstill.com.  Memorials may be made to the American Cancer Society.
To order memorial trees or send flowers to the family in memory of Janet L. Laipply, please visit our flower store.