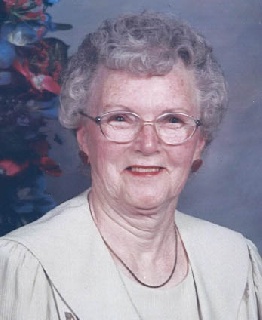 Biography:  Ivie Mead, 88 of Bucyrus died Monday December 28, 2015 at Altercare of Bucyrus after a brief stay due to her year long fight with a rare skin cancer.  Ivie was born January 15, 1927 in Manchester, England to the late Joseph and Florence Rowell.  Ivie was first married to Earl Schifer in England in 1945 during WWII and then came to the U.S. in April 1946.  Earl died later that year in a house fire.  Ivie then married Walter (Mike) Mead in January 1949.  Known as “Mailman Mike”, he preceded her in death in 1983.

Ivie became a U.S. citizen in November of 1953.  She was a member of Good Hope Lutheran Church for over 65 years and was actively involved.  For over 10 years she was a Sunday School Teacher and one of the first Cub Scout Den mothers for Pack 60.  Ivie was a member of the Hannah Circle and Cherry Tart Red Hat group, servingon numerous committees thru the years; decorating the Church was one of her favorites.  Ivie worked briefly at G.E. and was retired from the Bucyrus City Schools after 22 yrs. in the lunchroom at Kilbourne.  Ivie was one of the founding members of the International Friendship Club and remained for over 60 yrs.  Her hobbies were knitting, decorating, her flower garden, and keeping up with her grand children and great grandchildren.

The family will receive friends at the Munz-Pirnstill Funeral Home on Thursday from 3-5 pm and at Good Hope Lutheran Church on Saturday from 11:00 am until 1:00 pm.  Services will be held at Good Hope Lutheran Church at 1:00 pm Saturday with Gene Luidhardt S.A.M. officiating; burial will follow in Oakwood Cemetery.  The family suggests memorials be made to the Church Memorial Fund or donor’s choice.  Expressions of sympathy can be left at munzpirnstill.com
To order memorial trees or send flowers to the family in memory of Ivie Mead, please visit our flower store.