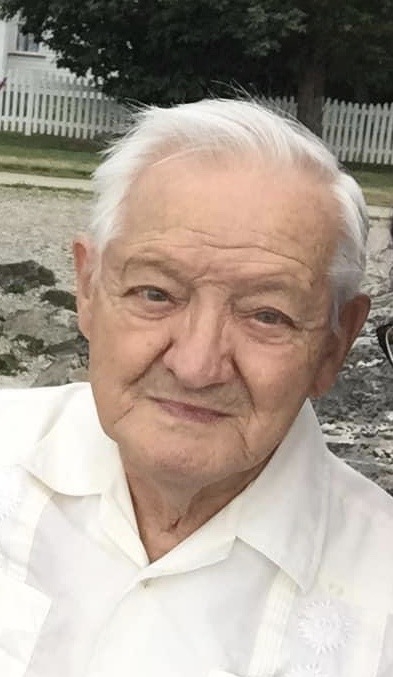 Biography: Harry "Jim" Harris, 92 of Bucyrus passed away on Monday July 27, 2020 at Mill Creek in Galion.  Harry was born March 25, 1928 in Bucyrus to the late Albert and Jennie (Barger) Harris.  He was married June 28, 1952 to Pearl Mae (Mobley) Harris who survives.
Harry is also survived by children Michael and David Harris both of Bucyrus; Nancy Miller of Bucyrus; and Barbara Harris of Oregon; grandchildren Heather Miller, Ben (Lyndsee) Miller; and Reva Anderson; as well as great grandchild Kaleb Miller.  He was preceded in death by son in law Robert Miller Jr.
Harry was retired from Verizon and prior to that had worked at Swan Rubber, GTE, and Montgomery Ward.  He lived his entire life in Bucyrus and graduated from Bucyrus High School in 1946.  Harry was a member of the First Alliance Church in Bucyrus.  He was a WWII Army Veteran and served in Alaska.  Harry was Past Commander (3 times) of the American Legion Post 181, served as Chaplain,  and was active in the Burial Ritual Squad.
Graveside Services will be held on Thursday at 1:00pm in Oakwood Cemetery.  Military Rites will be provided at the cemetery.  The family suggests memorials be made to the church building fund or Gideon's and expressions of sympathy can be left at www.munzpirnstill.com
To order memorial trees or send flowers to the family in memory of Harry "Jim" Harris, please visit our flower store.