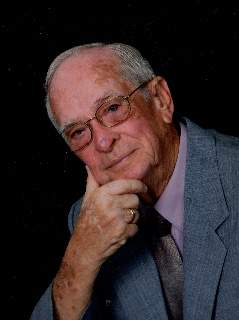 Biography: Harold “Gene” Martin, as he was known to all who knew him, age 89, of Crawford County Ohio passed away Monday, May 13, 2019 at the Inn at Orchard Park assisted living, in Bucyrus Ohio, where he has resided for the past year. During the last couple months, his care was assisted by Hospice, provided by Kindred Healthcare of Marion, Ohio.


He was born in Delaware County, Ohio to Harold Dwight Martin and Martha A. (Hurlow) Martin on January 15, 1930. He was a devoted husband, father, and grandfather throughout his life. He was preceded in death by his loving and devoted wife, Joyce (Johnson) Martin of 65 years on March 19, 2017, who he dearly missed. He was also preceded in death by his parents, and his younger brother Ronald Dwight Martin of Florida.

He was a 1947 graduate of the Leesville School, being the last surviving member of his graduating class. He served his beloved country in the Naval Reserve Air Wing in Columbus, Ohio. He was employed at the old Galion Allsteel, before becoming a parts manager, having worked as parts manager at the old Bishop Buick in New Washington, and then various Ford dealerships in Galion and Mansfield. Gene grew up in the Leesville area, residing there and in Galion with his family most of his life. Following their retirement Gene and his wife moved to Leesburg, Florida, where he resided until returning to the Inn at Orchard Park in 2018 to be near his family.


Gene’s greatest pleasure was spending time with his family and friends, also being an avid camper from 1964 through 2011, having started with a pickup truck camper and progressing into and having owned multiple motor homes during that time. He was a long time member of the FMCA, being a club member with the Midwest Coachmen of Ohio and the Challengers in Florida, enjoying campouts and rallies with his family and friends. His other enjoyment was ice cream, especially making homemade ice cream with his hand crank White Mountain ice cream freezers. He was also an avid Ohio State fan.

As per his request, there will be no local services. At a later date his daughters will transport his ashes back to his church in Florida. At that time there will be a small graveside service, at the CUMC, where his ashes will be interned, to be reunited with his loving wife.

In lieu of flowers, memorial contributions can be made to either Kindred Healthcare (Hospice) of Marion or Woodlawn United Methodist Church of Bucyrus thru Munz-Pirnstill Funeral Home of Bucyrus, Ohio.
To order memorial trees or send flowers to the family in memory of Harold “Gene” Martin,, please visit our flower store.