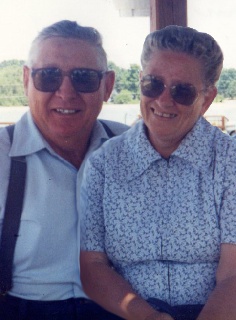 Biography: Glenn E. Carman, 90 of Bucyrus passed away on Monday October 9, 2017 at Bucyrus Community Hospital following a very brief illness.  Glenn was born October 15, 1926 in Neff, OH to the late Walter and Minnie (Eikleberry) Carman.  He was married July 4, 1947 to Ruth (Broomhall) Carman who preceded him in death on Jan. 24, 1997.  He was also preceded in death by wife Anna Massie; brothers Ralph, Arles, and Homer; grandson Mark Blunt; and great grandchild MacKenzi.


Glenn retired from General Motors in 1986 after 30 years as a Tool and Die Maker, he also farmed for many years.  He attended school in Neff, OH and moved to this area in 1948.  He was a member of the Church of Christ in Christian Union where he served as Treasurer for more than 25 years and was an Elder.  He was an Army Veteran of WWII and member of the Farm Bureau.  Glenn enjoyed working on small engines.


Funeral Services will be held on Friday at 11:00 am in the Church of Christ in Christian Union with Pastor George Lore and Pastor Bob Jividen officiating, burial will follow in Crawford County Memory Gardens.  The family will receive friends at the Munz-Pirnstill Funeral Home on Thursday from 4:00 until 7:00 pm.  Memorial contributions can be made to the church and expressions of sympathy can be left at www.munzpirnstill.com
To order memorial trees or send flowers to the family in memory of Glenn E. Carman, please visit our flower store.