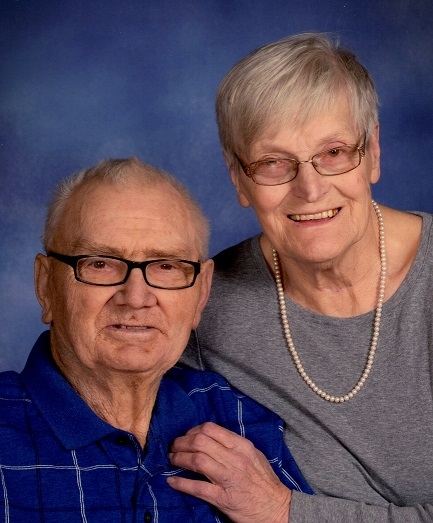 George L Lucius Jr. and his wife Jeannette A. Lucius

Biography: George L Lucius Jr. and his wife Jeannette A. Lucius of rural Bucyrus, married for over 63 years, passed away on Sunday and Monday August 16 and 17th at home, both at the age of 83. George was born September 17, 1936 in Cranberry Twp., Crawford County to the late George and Mary (Durnwald) Lucius. Jeannette was born December 5, 1936 in Fostoria to the late William and Louise (Reinhart) Brose. Together George and Jeannette had 11 children, Ronald (Juanita)Lucius of Bucyrus, Steven (Beth) Lucius of Bay Village, OH, James Lucius of Bucyrus, Benedict (Dayanne) Lucius of New Washington, William (Patricia) Lucius of Bucyrus, and Michael Lucius of Bucyrus, Marjorie (Donald Price of West Jefferson, Catherine (Perry) Slone of Alvada, OH, and Agnes (Chris) Wells of Berlin, OH, as well as daughter Mary Jane and son Roger William Lucius, granddaughter Amburr Lucius who preceded them in death, 22 grandchildren, and 21 great grandchildren.
George farmed his entire life and at one time worked at K & K Lumber. He attended New Washington High School with the class of 1953. George was a member of Holy Trinity Catholic Church where he served on the school board and cemetery board. He was a 4th Degree Knights of Columbus and Past Grand Night for New Washington K of C #1718. George also served on the board of the Bellevue Milk Producers and board for the Farm Bureau.
Jeannette was a homemaker and farm wife helping George on the farm. Before she married George she worked at Gem in Bascom, OH. She was a member of Holy Trinity Catholic Church, the Rosary Alter Society, and the St. Vincent DePaul as well as being a Lay minister, organizing funeral luncheons for over 40 years, and helping with Bingo.
George's siblings include Herbert (Nancy) Lucius of New Washington, Robert Lucius of Shelby, Norman (Geraldine) Lucius of New Washington, Kenneth (Kathy) Lucius of New Washington, and Doris (Richard) Williams of New Riegel, preceding him in death were twins Joe Lucius and Joanne Wise.
Jeannette's siblings include Frank (Donna) Brose of Tiffin and Andrew Brose of Sycamore, Alice Lucius of New Riegel and Roseann (James) Mayer of Tiffin. She was preceded in death by sisters Inez Kerlin, Anna Waltermeyer Lannes and Lucille Smith, and brothers Paul, Bernard, Virgil, Jacob, and Herman, and William JR Brose.
Mass of Christian Burial will be celebrated at Holy Trinity Catholic Church for the family per George and Jeannette’s request with Father Paul Fahrbach as Celebrant and burial in Holy Trinity Cemetery. The family suggests memorials be made to the Holy Trinity Repair and Maintenance Fund and expressions of sympathy can be left at www.munzpirnstill.com
To order memorial trees or send flowers to the family in memory of George L Lucius Jr. and his wife Jeannette A. Lucius, please visit our flower store.