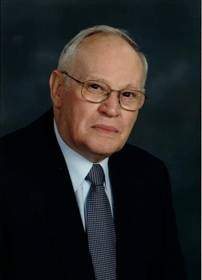 Biography: Frederick Martin Schifer, 92, of Bucyrus, Ohio was called to his heavenly home, Saturday, June 25, 2016 at Edgewater Place, Plain City, Ohio with his family and wife of 68 years at his side.
Fred was born at home on the family farm on Knauss Road, Brokensword, Ohio, the fourth of eleven children on May 28, 1924 to the late Carl Robert and Arlettie Christine (Miller) Schifer.
A U. S. Army veteran of World War II, Fred was inducted into the US Army on March 15, 1943 and served with the 55th Anti-Aircraft Brigade Headquarters Battalion. Fred proudly served his country in Scotland, England, France, Belgium, Germany, and Holland. At age 19 he was placed in charge of one and sometimes two line crews to construct communications (telephone) lines following the battles. His crews landed south of Le Havre, France 12 days after the initial D-Day attack. Having served in many locations in Europe, he was honorably discharged on October 28, 1945 having advanced to the rank of Staff Sergeant and earning the Bronze Star and other service medals.
On October 5, 1947 he married Mary Ann Fischer at Good Hope Lutheran Church, Bucyrus, and she survives him.
A man of quiet faith, Fred was a lifelong member of Good Hope Lutheran Church, Bucyrus having served as an usher, deacon, on church council, and over the years, helping with various church projects. Fred was employed by the Ohio Power Company (AEP) and retired after nearly 40 years of service. Always wanting the best for his family, Fred responded to many after-hours service calls, late at night, on weekends and holidays, working in all kinds of weather to restore power to Ohio Power customers. Fred also worked on many residential and small commercial electrical wiring projects to further supplement his families’ income.
He was a member of the American Legion Post 181 and past member of Bucyrus Lodge #139 Free & Accepted Masons, and the Loyal Order of the Moose Lodge #669 (since 1990).
Fred was a good, quiet, and faithful man with a servant’s heart who loved life and was deeply devoted to his wife and family. He taught his family faith in a loving God, honesty, and the values and blessings of hard work. Fred enjoyed working in his yard and wood shop and enjoyed every day after his retirement. He will be greatly missed, but his family rejoices in the victory of his eternal life through Christ Jesus.
In addition to his wife, he is survived by two of his three children; Thomas (Cindy) Schifer of Marion and Debra Schifer of Columbus, son-in-law Wally Yost of Westerville, Ohio; grandchildren Beth and Laura Yost, Columbus; Tim (Jen) Schifer, St. Joseph, Michigan; Daniel Schifer, Chicago; Jennifer Kirk, Columbus, and James (Jordin Trebec) Kirk, Columbus; great grandchildren, Brandon Thomas and Ava Green, and Sam and Josie Schifer. Fred is also survived by a brother Ralph (Norma) Schifer, and sisters Bertha Rothlisberger, Barbara (George) Miller, and Helen Case; brothers in-law, Rudy Sharkey, George (Dorothy) Fischer, and Frank (Maggie) Fischer.
In addition to his parents, Fred was preceded in death by his Father and Mother-in-Law, George Fischer and Lena Fischer Stump, daughter Susan Elaine (Schifer) Yost, grandson Robert Frederick Schifer, brothers and sisters Ira Earl (Ivie Mead) Schifer, Paul (Janet) Schifer, Vern (Joy) Schifer, Dale (Phyllis) Schifer, and sisters Mildred “Millie” Sharky and Mary Louise “Lue”(Charles) Estermeyer, and brother-in-law James Case.
Funeral services will be at 12 Noon, Thursday, June 30, 2016 at Good Hope Lutheran Church, with Pastor Renae Ahern officiating. Friends may call Wednesday, from 4:00 - 7:00 P.M. at the Munz-Pirnstill Funeral Home, Bucyrus, Ohio and at 11:00 AM prior to the service at Good Hope Lutheran where family will receive friends. Burial will follow at Oakwood Cemetery, Bucyrus. The family suggests memorial contributions be made to the Good Hope Lutheran Church in care of the funeral home and expressions of sympathy can be left at munzpirnstill.com
To order memorial trees or send flowers to the family in memory of Frederick Martin Schifer, please visit our flower store.