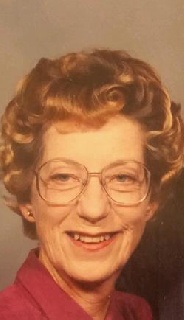 Biography:  Donna L. Phillips, 87 of Bucyrus passed away on Sunday morning at Crestline Nursing Home.  Donna was born August 29, 1928 in Cranberry Twp., Crawford Co. to the late George Carl and Helen Belle (Powers) Kraft.  She was married June 3, 1949 to Richard E. Phillips who preceded her in death on June 15, 2011.  In addition to her parents and husband, she was preceded in death by 4 brothers and 4 sisters.
Donna is survived by sons David (Kellye) Phillips of St. Joseph MN; Dan (Inez) Phillips and Dale Phillips both of Mansfield; 7 grandchildren; brother Florin (Mary) Kraft of New London; and sister in laws Marilyn Kraft of Willard and Doris Kraft of MN.
Donna worked at North Electric for 13 years until 1972. She was also a farmwife and homemaker.  Donna grew up in the New Washington area and graduated from New Washington H.S.   She was a member of Good Hope Lutheran Church, volunteered for the Bd. Of Elections for several years and she enjoyed spending time fishing at Lake Erie.
Funeral Services will be held on Friday at 1:00 pm in the Munz-Pirnstill Funeral Home with Gene Luidhardt, S.A.M. officiating, burial will follow in Oakwood Cemetery.  The family suggests memorials be made to the Good Hope Radio Fund.  The family will receive friends at the funeral home on Friday from 11:00 am until the time of service. Expressions of sympathy can be left at munzpirnstill.com
To order memorial trees or send flowers to the family in memory of Donna L. Phillips, please visit our flower store.