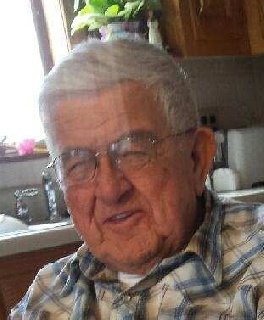 Biography:  Donald F. Fox, 85 of Bucyrus passed away on Monday May 20, 2019 at Bucyrus Community Hospital.  Don was born November 9, 1933 in Bucyrus to the late Paul G. and Marie A. (Beran) Fox.  He was married June 25, 1966 to Ruth Ann (Lambright) Fox who survives.  In addition to his parents, he was preceded in death by daughters Donna and Barbara, twins Mathew and Clarence; and siblings John, Jerome, Rita, Martha, Edward, Rosey, Paul, Jim, Emily, Tom, Elaine, and Tony.
Don is also survived by sons Joseph and Jerome both of Bucyrus; brothers Carl and Richard; as well as many nieces and nephews.
Don graduated from Bucyrus High School in 1966 and served in the Army Missile Corp for 6 years in the National Guard.  He worked for the Bucyrus and Holy Trinity School Systems, Bob's Sandwich Shop, New Method Laundry, GE, and retired from Timken in 1995 after 26 years.  Don was a Scout Leader and Adviser in 4-H all boys cooking group called Scorch and Burn.  He was an active member of Holy Trinity Catholic Church and the K of C.  For many years Don took care of the Holy Trinity Cemetery. He was known for his smile and riding around town on his red scooter, he had an open personality.
At Don's request his body was donated to O.S.U. for anatomical study.  A Memorial Mass will be Celebrated on Saturday at 11:00 am in the Holy Trinity Catholic Church with Father Paul Fahrbach as Celebrant.  The family will receive friends at the church from 10:00 am until the time of the service.  Memorials may be made to the St. Vincent DePaul Society and expressions of sympathy can be left at www.munzpirnstill.com
To order memorial trees or send flowers to the family in memory of Donald F. Fox, please visit our flower store.