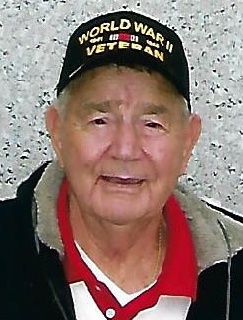 Biography:  David M. Sipes, 92 of Bradensburg, OH passed away on December 8, 2018 at Kobacher Hospice in Columbus, OH.  He was born February 7, 1926 in Galion to the late Arthur and Lucille (Fisher) Sipes.  He was married August 27, 1950 to Phyllis Sue (Snyder) Sipes who passed away July 26, 2005.  David was also preceded in death by daughter Kathy Sue Sipes, brothers Royce and Gerald, and sisters Geraldine and Ramonna.
David is survived by "His Boys" Mike and Ken of Bladensburg, OH; sisters Rosie Sipes Schwartz of Bucyrus and Mudge Doran of Blaunlville, TN; brothers Richard Sipes, Bucyrus, Franklin Sipes of Paoli, IN, and William Sipes of Nova, OH; brother-in-law Dr. Ron Vanburen and sister-in-law Glenda Vanburen of Worthington, OH; as well as nieces, nephews, and grandchildren.
David joined the U.S. Navy January 28, 1944 and served in the South Pacific from 1944-1946 a Coxswein assigned to Admiral Sprague and Admiral Halsey's flagstaff.  He served on the Essex in the Battle of New Guinea; Wasp in Battle of Marianas; Hornet in the 1st Battle of Philippines; Bunker Hill in the battle of Morotai; Fansaw Bay in the Battle of Leyte; Natoma Bay in 2nd battle of the Philippines; Saratoga in battle of Iwo Jima and Intrepid in the battle of Okinawa.  David's decorations include the American Theater Ribbon, Atlantic Pacific 6 stars, Philippine Liberation 2 stars, and the WW II Victory Medal.  Following the war David completed his High School education and graduated from Bucyrus High School in 1947.
David retired from Timken after several years and following retirement lived in Bradenton FL for 20 years.  He returned to live in Michigan, Bucyrus, and Bladensburg, OH.  For the past eight years he was active in the Hawatha Golf Course Summer Senior League as well as the Silver Sneakers of Knox Comm. Hospital Center for Rehabilitation and Wellness.  David was a Buckeye Fan and enjoyed Shriner's activities and Gospel Music.  He was a member of the American Legion Post 181 for 41 years; Life Member of VFW 1078; a 32nd Degree Mason AASR Northern Masonic Jurisdiction for 58 years.; Grand Lodge F & AM Ohio Lodge #139 Bucyrus; the Aladdin Shriners; and the Bucyrus Moose Lodge #669 for 50 yrs.
Funeral Services will be held on Friday at 1:30 pm in the Munz-Pirnstill Funeral Home, Bucyrus with Rev. Jeff Pennington officiating, burial will be in Oakwood Cemetery.  The family will receive friends at the funeral home on Thursday from 6 pm until 8 pm with Masonic Services at 7:45 pm.  The American Legion Honor Guard will provide Military Honors.  Memorials may be made to the Shriners Burn Hospital and expressions of sympathy can be left at www.munzpirnstill.com
To order memorial trees or send flowers to the family in memory of David M. Sipes, please visit our flower store.