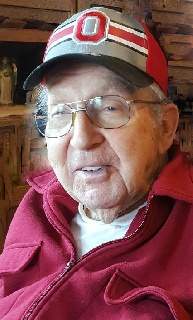 Biography:  Charles W. Huggins II, 87 of Bucyrus passed away peacefully Saturday December 23, 2017 surrounded by his loving  family.  Charles was born August 23, 1930 in New Washington to the late James E. and Grace (Kauffman) Huggins.  He was married May 11, 1951 to Jeanne (Croy) Huggins who preceded him in death February 27, 1983.  Charles was also preceded in death by brothers James Jr., William,  Thomas, and son in law Richard Fultz.  Charles is also proceeded in death by his  longtime companion Jean Stuckert.    Charles and Jean enjoyed many years of traveling and camping together throughout the United States and Canada.  He also enjoyed the faithfull  companionship of his special dogs "Dusty", "Rex", and "Zoey".


Charles graduated from Bucyrus High School in 1948 and attended Ohio State University.  He proudly dedicated his entire life to  farming, raising livestock  and managing Huggins Farms, also known as Blue Goose Farms.  Charles served in the U.S. Army during the Korean War and was a member of the American Legion Post 181.  He was a Whetstone Twp. Trustee for 12 years and enjoyed tractor pulls and car shows.  Charles was an avid fan of Colonel Crawford Softball, the Cleveland Indians, Ohio State Football, and the Cleveland Browns .,who he  would always jokingly tell his children "there is always next year".


Funeral Services will be held on Thursday at 1:00 pm in the Bucyrus United Methodist Church with Rev. Michael Corwin officiating, burial will follow in Oakwood Cemetery.  The family will receive friends at the Munz-Pirnstill Funeral Home on Wednesday from 1-3 and 5-7 pm.  The family asks that memorial contributions be made to the  Colonel Crawford Softball Program  thru the CC Athletic Boosters. Expressions of sympathy can be left at www.munzpirnstill.com.
To order memorial trees or send flowers to the family in memory of Charles W. Huggins II, please visit our flower store.