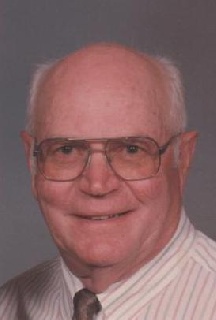 Biography:  Arlo Lutz, 95, of Bucyrus Ohio, passed away at Carlisle Place on Friday, July 22, 2016 with his loving family of five generations at his side. He was born to the late Wylmer A and Esther R Lutz on March 28, 1921 in Bucyrus OH.  Arlo  married Lois M Harrer in 1939 and celebrated 50 years of marriage in 1989.  In 1991, he married Patti A Knodell.  Both proceeded Arlo in death along with a daughter, Elaine.


Arlo was a graduate of Holmes Liberty High School in 1939.  For 52 years, farming was his life in the Chatfield and North Robinson areas.  He also farmed at the Chuck-Walt Farms for 5 years and helped with the Jersey Dairy. He was a member of Epworth Methodist Church now known as Bucyrus United Methodist Church for 65 years where he sang in the choir.  Arlo was a member of the Brokensword Methodist Church on Route 4 in his early years.  He was a Whetstone TWSP Trustee for 20 years, served on the County Health Board, was a DeKalb dealer, an originalmember of the Community Foundation Board, a member of the Century Club for YMCA, a honorary member of the Col Crawford FFA, served on the Soil and Water Conservation Board for 18 years and was a member of the Antique Tractor Club.  During 1972-73, he served as 2nd V. President of Crawford Regional Planning Commission.  In 1982, he received the Good Year Conservation Award for being an outstanding cooperator and in 1985 the Goodyear Conservation Award of Merit.  In 1992, he was inducted into the Hall of Fame for Soil and Water Conservation.  Arlo also loved his trains and traveling.


Funeral Services will be held on Wednesday at 11:00 am in the Bucyrus United Methodist Church with Rev. Mike Corwin officiating, burial will follow in Oakwood Cemetery.  The family will receive friends at the Munz-Pirnstill Funeral Home on Tuesday from 3:00 pm until 8:00 pm and again on Wednesday at the church from 10:00 am until the time of the service.  The family suggests memorials be made to the Harbor Light Hospice or the Bucyrus United Methodist Church through the funeral home.  Expressions of sympathy can be left at munzpirnstill.
To order memorial trees or send flowers to the family in memory of Arlo Lutz, please visit our flower store.