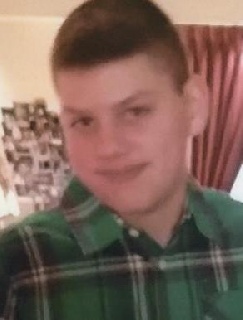 Biography:  Anthony Christian Parrish, 14 of Bucyrus passed away on Friday July 8, 2016.  Anthony was born April 16, 2002 in Marietta OH and is the son of John Kahl and Maria Maffettone.  He is also survived by brothers Matthew Parrish of Bucyrus; John Kahl II of Mansfield and sister Marlee Kahl of Mansfield; Maternal great grandparents Gail and Dick Murray; Paternal grandparents Harvey Kahl; Bob and Phyllis Buck; and Penny Jones; Paternal great grandparents Blanche and Pearley Jones.  He was preceded in death by his maternal grandparents Sandra Murray and Ben Maffettone; as well as numerous aunts, uncles, and cousins.

Anthony was a student at Bucyrus High School and was going to be entering the 9th Grade.  He enjoyed playing football in school as well as video games and the outdoors, doing such things as fishing, riding dirt bikes, playing basketball, and mowing lawns.
A Memorial Service will be held on Thursday at 5:00 pm in the Munz-Pirnstill Funeral Home and the family will receive friends from 3:00 pm until the time of service.  Expressions of sympathy can be left at www.munzpirnstill.com
To order memorial trees or send flowers to the family in memory of Anthony Christian Parrish, please visit our flower store.