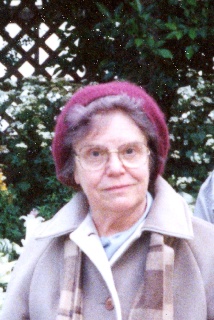 Biography:  Anna Mae Scott, 95, a former Bucyrus resident and for the past 5 years a resident in the Chicago area passed away on Thursday May 12, 2016 in Des Plains, IL.  Anna was born April 19, 1921 in East Liverpool, OH to the late Charles E. and Margaret (Layne) Barrett. She was married June 4, 1949 to Robert B. Scott who preceded her in death on March 22, 2002.
Anna is survived by daughter Karen Scott Johnson and husband Dennis Rupert of Chicago, IL.  She was preceded in death by brother Russell Barrett.
Mrs. Scott had first worked in Bucyrus at General Electric followed by the Crawford County Credit Bureau and J.C. Penney.  She last worked at A-1 printing.  Anna served in the U.S. Navy during WWII and continued working for the Navy in Wahington D.C. until 1949.  She was a member of the American Legion Post 181, Eastern Star, and First Presbyterian Church.
Funeral Services will be held on Tuesday at 1:00 pm in the Munz-Pirnstill Funeral Home with Rev. John Cory officiating, burial will follow in Grand Prairie Cemetery, Brush Ridge.  The family will receive friends from 11:00 am until the time of the service. Memorials may be made to the First Presbyterian Church and expressions of sympathy can be left at munzpirnstill.com.
To order memorial trees or send flowers to the family in memory of Anna Mae Scott, please visit our flower store.